I had planned on just doing an 8-mile run… but a flooded road changed that plan. 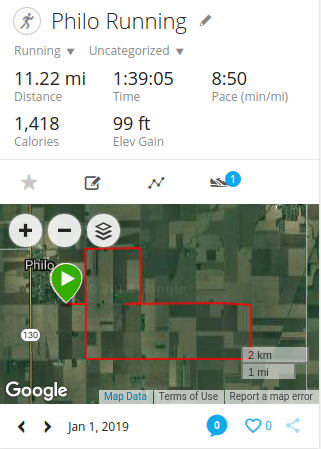 The end of 2018 left us with at least 2-inches of rain in less than 24 hours, thus causing a lot of standing water and some flooded roads.

When I went out on the 1st I expected some water obstacles, I generally know which roads flood, so I was happy to see the roads in the first few miles had already drained back into the ditches. However, about 6-miles in there must have been some restricted drainage leaving a small river still flowing over the road between me and home.

I could have run through the overflow, but I’d rather not! Of course, there is the danger of how fast the water was moving, not really knowing how deep it was, plus I would have been soaked and still had about 2 miles to go.

I had the time, and there were options, they all involved several additional miles.

As I turned around to take an alternate route, churning the alternatives over in my mind and wondering if I was going to have to make other accommodations based on what might be ahead.

It was nice to see the other roads were clear on my first option and no other changes were necessary. It made the first day of the new year just a bit more exciting.